In traditional object-oriented programming, classes are primarily used to model objects. Objects can inherit state and behavior — e.g., properties and methods — from a parent class. Swift is single-inheritance, meaning, a class can only inherit from a single parent class. This approach can lead to an extensive class hierarchy, and code that is tightly coupled and rigid. 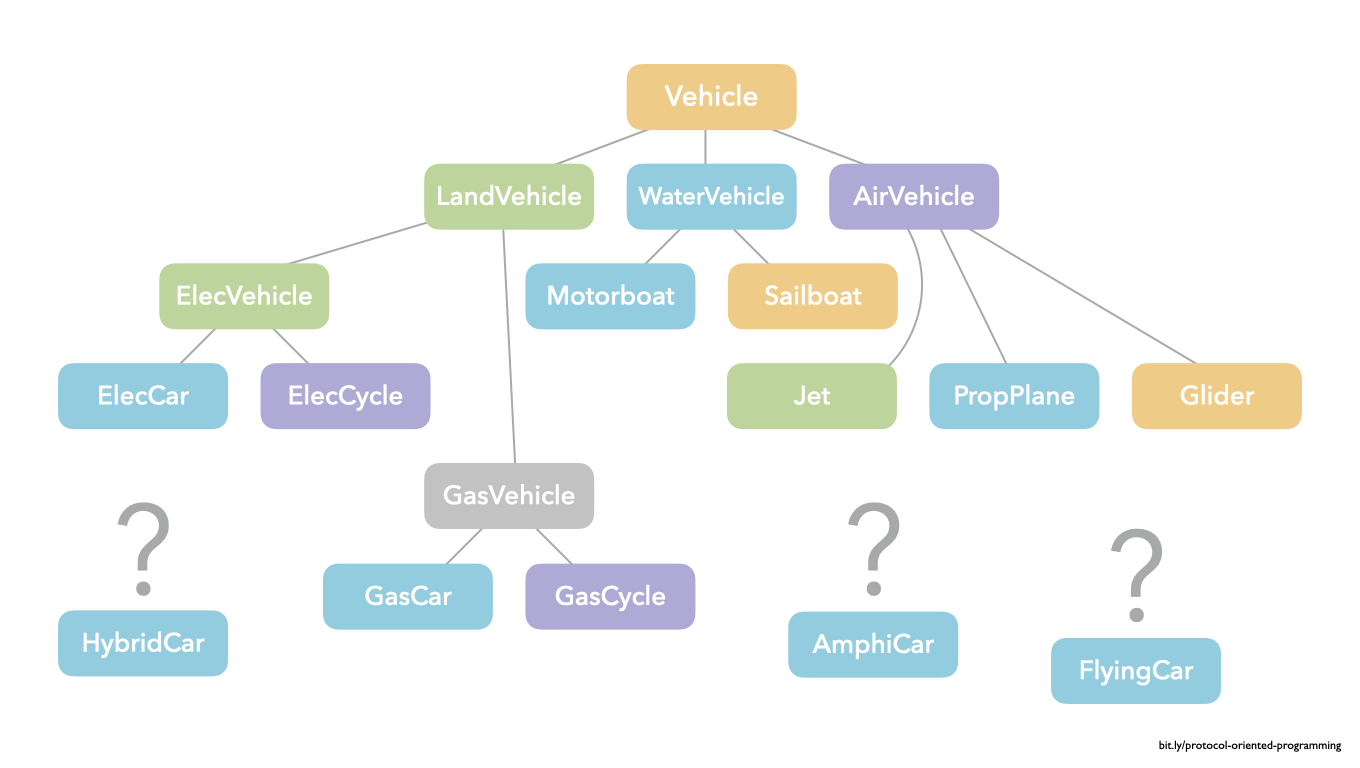 However, from which parent class would you subclass HybridCar? It needs to inherit state and behavior from both ElecVehicle and GasVehicle, so you would need to duplicate that state and behavior in a new subclass of LandVehicle. And how would you define AmphiCar, i.e., a car that can travel on land or water? What if AmphiCar could also be powered via gas or electricity?

This approach would quickly become unwieldily and lead to excessive duplication and rigidity. Additionally, type inheritance is not available for value types, such as structures and enumerations.

Protocols can help create a more flattened model hierarchy. They can be used with structures and enumerations, in addition to classes. And a type can adopt multiple protocols, similar to multiple class inheritance found in other languages.

The following animation shows how each concrete model type can adopt and conform to one or more protocols — i.e., Electric, Gas, Wheeled, etc. — to holistically define the requirements for that type. This approach keeps your model definitions modular and decoupled.

Unlike with class inheritance, in which the actual properties and methods are implemented, protocols only define requirements. This is still highly beneficial, because it enables you to expressively define types that are certain to have the expected state and behavior. This also aids in unit testing protocol-defined types, e.g., using mock objects that conform to the same protocols.

Additionally, protocols can be extended to provide default implementations. This enables you to avoid duplicating code, and it keeps your model definitions flexible to be extended or modified later.

Protocol-oriented programming is not exclusive. It is common to use class inheritance and protocol-oriented programming techniques in the same project, and even in the same type. One reason why you may do this is that protocol extensions cannot implement stored state, i.e., it is not possible to set a property to a default stored value in a protocol extension. Therefore, a class may be subclassed to inherit a stored property, and then use protocols to add new methods to provide the behavior required for instances of that class.

Protocols are defined similarly to concrete types such as classes and structures, using the protocol keyword. Protocol type names should indicate either the requirements of the protocol or the behavior of a type that conforms to the protocol. For example, BidirectionalCollection or Equatable.

Required properties must indicate if they are read-only ({ get }) or read-write ({ get set })¹. Property requirements are defined using the var keyword, however the actual implementation may opt to define the property as a let constant if the requirement does not specify it must be read-write.

Method requirements only define the signature, not the actual implementation body. They also cannot define default parameter values. Associated types can be defined and referred to in the protocol definition, to be implemented via a type alias by the adopting type if the associated type cannot be inferred.

In the above code, an associated type Direction is required, and a read-only topSpeed property and method turn(direction:percent:) are defined.

Example: Adopting and conforming to a protocol

In the above code:

As mentioned earlier, protocols can inherit from multiple parent protocols.

In the above code, protocol C inherits the requirements of protocols A and B.

Another way to declare inheritance of multiple protocols is by using protocol composition.

In the above code, protocol D adopts a temporary unnamed protocol that is composed of protocols B and C using the & operator. Because protocol B adopts A, D will inherit all the requirements of A, B, and C. It is common to create type aliases when composing protocols, to give the composed protocol a meaningful name, e.g., typealias BAndC: B & C`.

Note: There are many additional aspects to working with protocols in Swift that go beyond the scope of this article. Consult the Swift language guide Protocols chapter for more information.*

In the above code:

When a class is subclassed and a member — e.g., a property or method — is called on an instance of that class at runtime, the program needs to determine whether the member is being called on that class or on an overridden member in the subclass. This is called dynamic dispatch, and this is how polymorphism is made possible. Dynamic dispatch involves looking up the function in a method table at runtime, and then performing an indirect call to it. In performance-sensitive code this additional work can have an adverse effect.

Additionally, marking a member or the entire class private will allow the compiler to determine if the member or entire class is final, and if so also avoid dynamic dispatch.

Remember: “Member” refers to a property or method.

When a type adopts a protocol and an instance of that type is defined explicitly or can be inferred to be a concrete type, all the protocol members are statically dispatched at compile time.

Example: Concrete instance of type conforming to a protocol

In the above code, concreteTypeInstance is inferred to be of type ClassA. Therefore, both members a and doA() are statically dispatched.

When an instance is defined to be of a protocol type, each member requirement that is declared in the protocol will be dynamically dispatched at runtime.

However, if a member is only provided in a protocol extension — i.e., not declared in the protocol itself — it is statically dispatched.

A member requirement that is defined in a protocol along with a default implementation in an extension is referred to as a customization point. The compiler will know that a customization may potentially be provided, so this will be dynamically dispatched to determine if a customization is actually provided.

Note: There is one caveat: Without a customization point, you will lose any customization in instances that are declared as of the protocol type.

In the above code, SomeStruct provides a customized implementation of a. However, because protocolTypeInstance is declared to be of a protocol type, even though it was assigned an instance of SomeStruct, it will not receive the customization.

The above code is identical to the previous example, except the customization point is included in protocol A’s definition.

Use this flowchart to determine if a member will be statically or dynamically dispatched. 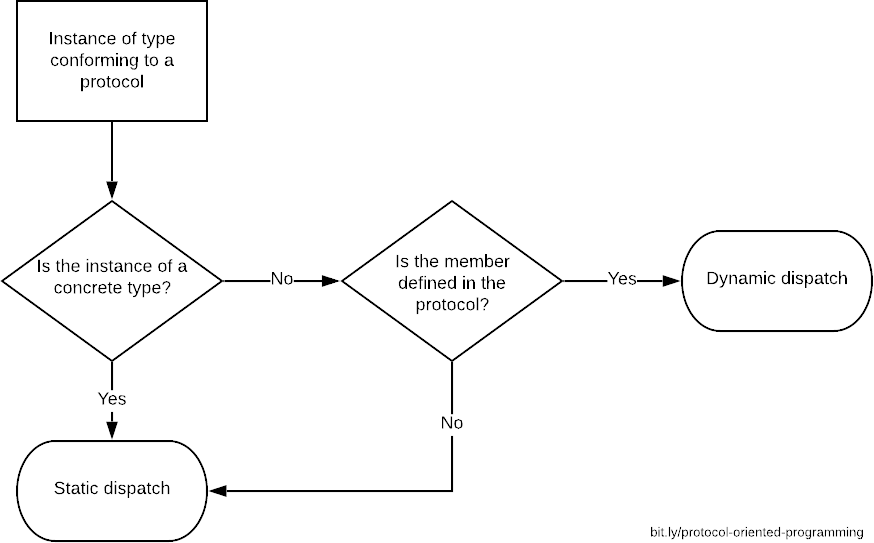 In this article, you learned about:

This work is licensed under a Creative Commons Attribution-NonCommercial-NoDerivatives 4.0 International License.
© 2020 Scott Gardner